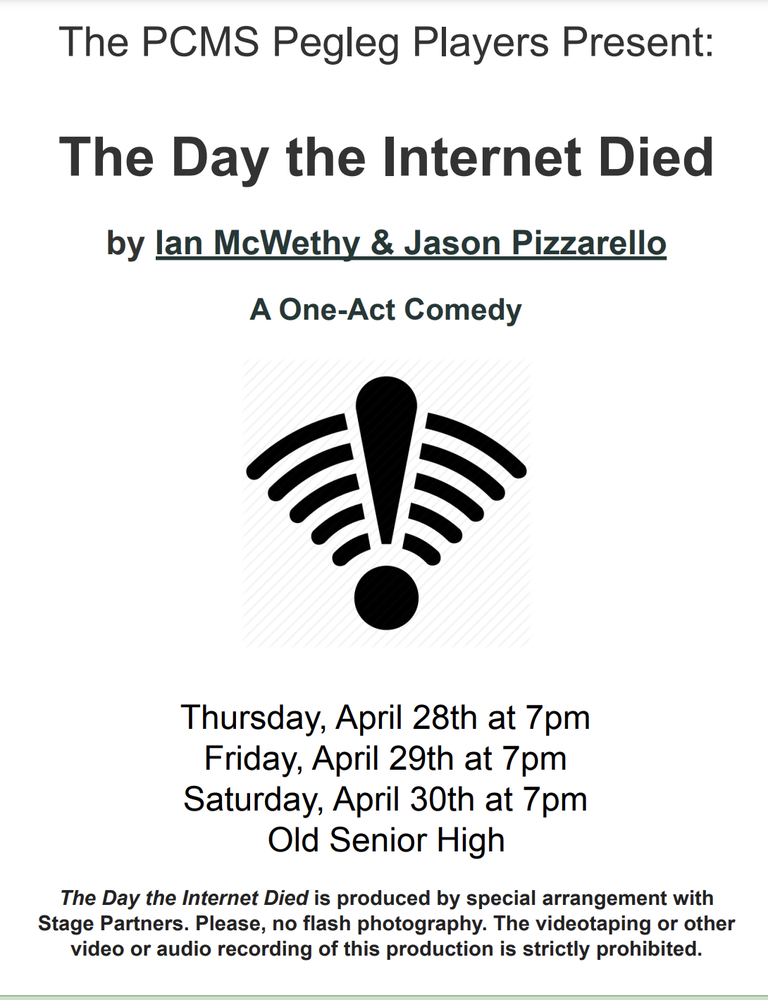 Perry County Middle School’s drama club is in rehearsals for a show about a disaster. No, it’s not a flood or earthquake — the internet has gone down! “The Day the Internet Died” is a one-act play set in a Perryville few will recognize, as pandemonium spreads while the wifi is out of service for an entire week. How will society function? Not well as it turns out. “’The Day the Internet Died’ hilariously explores how inept we are at dating, research, and basic human interactions when we don’t have a screen to look at,” said Director Robbie Riehn.

Shows are at 7 pm Thursday-Saturday,  April 28-30 at the Old Senior High Performing Arts Auditorium at Perry County School District 32. Tickets can be purchased at at http://pcmsd.booktix.com with a credit card (reserved seating) or cash only at the door (general admission). Children 2 and under are free.

“This modern-day play will leave you laughing at all the useful and dumb things we use our phones and the internet for in today’s world,” Mr. Riehn said. “’The Day the Internet Died’ is produced by special arrangement with Stage Partners. Running time is about 40 minutes, and there is no intermission.

Stage Partners has given us permission to adapt this play to be set in our own town, so it’s been a lot of fun! From drinking coffee at Villainous Grounds, being offered free doughnuts from Hoeckle’s Bakery and Deli, to attending a date night sponsored by the Perry Park Center and the Bank of Missouri, it’s been so much fun mixing theater and our community together to produce this show with a twist of Perryville thrown in!”

LILY, interviewing for a job-Lily Choate