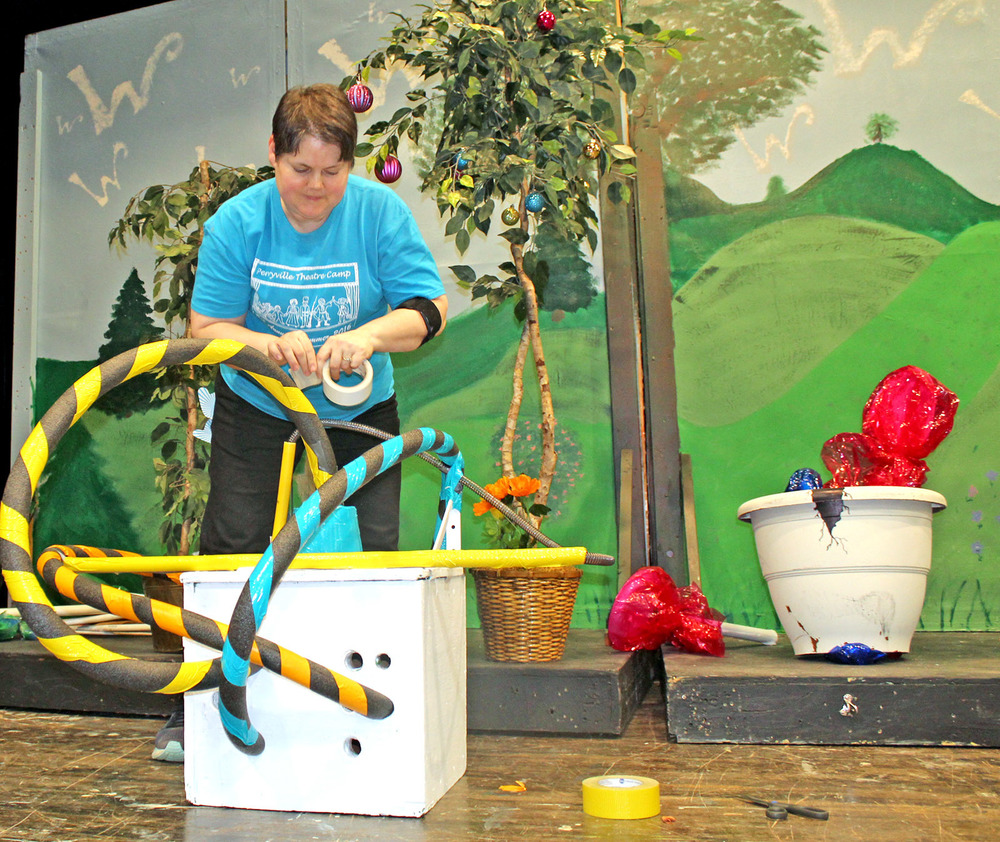 On a rainy Wednesday afternoon, Jennifer Birk-Cook is on stage at Perryville High School, creating stage props for “Charlie and the Chocolate Factory,” the 43rd show she has directed for the Silver Dagger Players drama program. She’s sharing the Old Senior High gym with the Pirate Baseball team, which is holding batting practice just behind the rows of audience seating.

Birk is busily creating “wonky inventions” for the iconic story of Willy Wonka, Charlie Bucket and the magical candy factory; in a few hours 30 high-school cast and crew members will arrive for their dress rehearsal for this weekend’s show. “Show week is always a little chaotic,” she said, “and always a lot of fun.”

“Charlie and The Chocolate Factory” begins tonight, Thursday, March 24 and runs through Saturday. Performances will be held in the Old Senior High Performing Arts Auditorium at 7 pm. Tickets are available at the door for $7 per person, aged 2 and up.

Birk-Cook has been the PHS drama club’s director for 21 years. The first show she produced was “And Stuff,” in the fall of 2000. She’s produced two shows per year with a hiatus during COVID-19, when “Charlotte’s Web” was canceled after schools were closed in March 2020. Some of her favorite stage shows are “Beauty and the Beast” and “Annie Get Your Gun,” both of which have been performed twice by the Silver Dagger Players.

“’Alice in Wonderland’ is another of my personal favorites,” she said, “We have done ‘Night of the Living Dead,’ an adult show which we did completely in black and white, which we all really enjoyed.”

Birk-Cook holds a bachelor of fine arts (BFA) degree in theater and children’s theater from Stephens College in Columbia. She is an actress and director, and an early childhood educator. She and her husband Stan, who is the digital media technology instructor at District 32, have three children –  Lydia, Olivia, and Jonah. “My kids have grown up on this stage,” she said. “When I was hired as the director for the drama club, I had babies and I said I’d have to bring them with me if I took the job. As children, they all attended rehearsals and shows with me and were sometimes cast when we needed young children in shows. Their coloring artwork is still on the backs of our backdrops. Lydia and Jonah joined drama when they were in high school, so we got to continue our ‘drama family’ tradition. I’ve really loved that.”

Birk-Cook said that she’s grateful for the opportunity to work with so many students over the past two decades. “I’ve had so many wonderful students involved in productions over the years,” she said. “The wonderful thing about drama is that it brings people together; we may have athletes, band kids, kids who want to study theater in college, and kids who are looking for their ‘thing,’ for their place to belong. The stage and theater is that place for so many of us. I love that every show cast and crew become friend and family.

“Theater is a terrific activity, one that is as important as any other school activity,” she said. “It develops confidence, speaking ability, creativity and problem-solving. The great thing about theater is that kids own it. They are invested in their show, in the sets and props they’ve made with their own hands, and the performance they give their audience.”

She said she has also worked with great educators and parents. “I’ve had amazing help from the PHS music department over the years when we produce musicals,” she said. “I’ve really enjoyed working with our current musical educators, Jerry Childers, David Barani and Taylor Davis. And I have to give a shoutout to Terry Edwards, who was an awesome mentor and taught me so much. Every year, we have parents who help with everything from building sets to costumes to concessions. I’m always very grateful for the work they put into making our shows special for the kids.”

Even with help, the 8-10 weeks of work leading up to a show are often a one-woman show with Birk-Cook teaching new students about acting, stage construction, lights and sound and costuming. “I’ve taught students to sew, how to make props out of cardboard and duct tape … and honestly loved every single, crazy minute of it!”

Birk-Cook issues a cast call for each show, and encourages new-to-theater students to try out for parts or sign up for behind-the-scenes work. She welcomes adult volunteers who love theater, or just helping kids have a great high-school experience. The Silver Dagger Drama Club is always grateful for audience members, whose ticket purchases fund future productions. 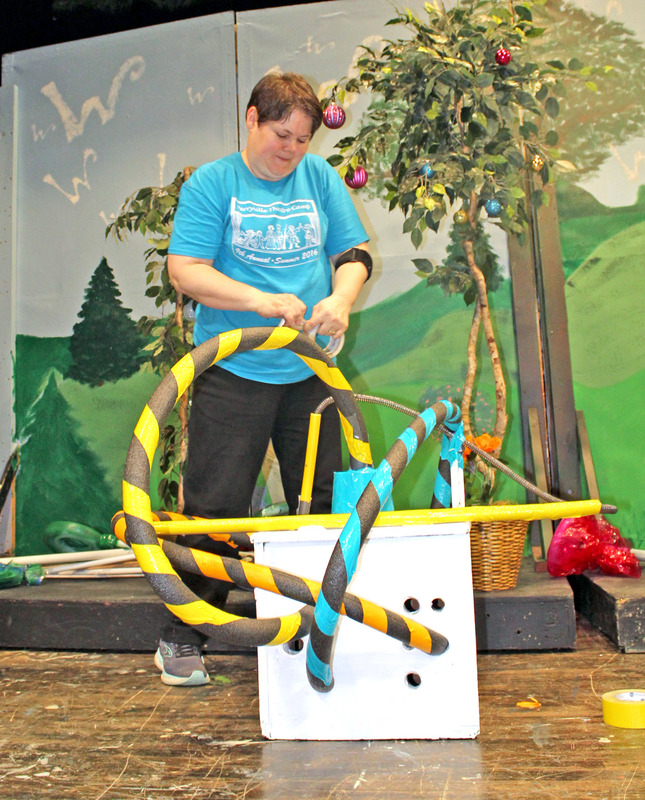